The first week in December is already past. The weirdness of December has begun.

December has a unique tension to it.  There’s the madness of having a gazillion things to do before the holidays, juxtaposed against the desire to not want to do any of it and instead just wind down and recharge.

There’s peace on Earth, goodwill to men pitted against wanting to punch the guy that beat you to your parking spot at the mall.

And then there’s the fun stuff, only some of which is weird.

Weird like Jason’s awesome Christmas sweater in the video.  Watch it, it’s only 9 seconds long. 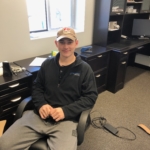 There’s the great feeling of welcoming back our road warriors Rob, James, and Matthew as they all get back from long startup and commissioning stints.  Where’s James? He’s right here putting in a cameo and setting up a new desk after returning home just yesterday.

There’s the excitement of knowing that Cassie will soon be whipping up chocolate and peanut butter fudge for everyone on the team. She took orders this week.

There’s the weirdness of Rob’s “word of the day” app coming up with “beanfeast”( Definition of “Beanfeast” ), and us immediately redubbing next week’s “Pendant Christmas Party” as the “Pendant Beanfeast”.

There’s the joy we feel for Brittany as the due date approaches for her first child, but that means she can’t join us for Beanfeast.

We have the weirdness of Matthew and Jason wearing somewhat-heavier-than-normal shirts as overcoats in 30-degree weather.

Cassie is also in the family way and getting good reports from her doctor that the baby-manufacturing process is going according to plan.

And then there is the general and wonderful weirdness of Shmedley…

Here’s hoping you enjoy an especially weird and fun December. Call on us if you need to make it weirder or more fun I like weird stuff